Hemingway Egoian-Cantabrana is a beautiful tabby born around the 4th of July. After spending his first 10 weeks of life on the streets, Berkeley Animal Services rescued him and brought him into my life. On October 4, 2011, Hemingway began his life adventure as the newest member of my family.
Within 10 minutes of arriving at his new home, Hemingway managed to squeeze himself behind the refrigerator, run into a mirror twice, and hide himself up the chimney. His cries kept me up that night as he wailed from under the bed, and then got himself stuck in our heater. Luckily, he quickly learned that sleeping on the bed was much more comfortable.

The next day, I was surprised to return home and discover that he had 1. found his litter box and 2. used it properly while home alone. Since moving into our house, Hemingway has had no accidents, and continues to surprise me with his intelligence. 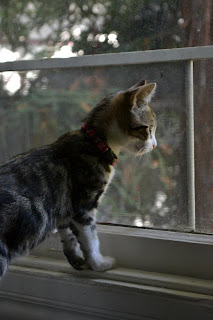 Within days Hemingway had found his favorite spot: my bedroom window. He enjoys sunbathing in the afternoons and watching neighbors walk by. The plan is to keep him an indoor-cat, as to keep him as healthy as possible, so for now, the window will have to do. As he has become accustomed to his surroundings, he has begun to explore more of the house. We limited him to the living room for the first couple of weeks, and once he became comfortable we allowed him to explore on his own. Hemingway maintains the living room as his safe haven, and every exploration leads him right back to his favorite spot on the couch.
The most difficult thing about Hemingway so far is his love for my Macbook. Whenever I'm using it, he can be found sitting next to me watching the screen and batting at the cursor, or attempting to type. When Hemingway's mealtime rolls around, his meows and whines let me know I'm taking too long with his food. When our mealtime rolls around, he finds it ridiculous that no one allows him to eat off of their plates. 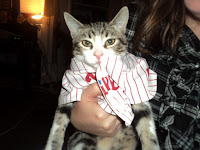 Halloween was not Hemingway's cup of tea. As a Phillies fan, I felt it only fair to dress Hemingway up as a Phillies player. The shirt was too big, and he refused to wear the pants, so this was as good as it was going to get. Throw in doorbell-ringing trick-or-treaters, and you have the recipe for Hemingway's least favorite holiday (so far). 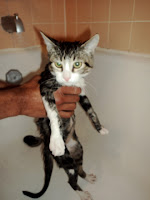 Hemi's most recent adventure was perhaps the most adorable (for me). After a month of allowing him to clean himself, we decided it was time for a bath. He wasn't as upset as I thought he would be, and he took the bath like the little champ that he is. He smells wonderful now, but I'm sure the next time he sees he's heading for the tub, he'll put up a bigger fight.
Hemingway is now 4 months old, and getting bigger every day. The week he came home from the shelter he weighed in at 3.4 lbs, and now a month later he is a healthy 4.2lbs and has received all of his kitten shots. We've only been a family for a month, but I look forward to many healthy, happy years together and hope that you'll join us through Hemingway's Adventures. 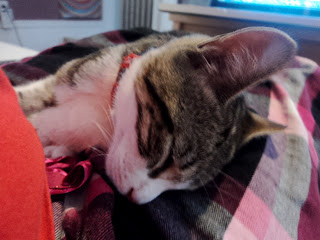 AMC
I am a Cox, a Bone, a Senior at UC Berkeley, and an adorable 4'10". I love the Los Angeles Lakers, the Los Angeles Dodgers, and the Philadelphia Phillies. Oh yes, and Derek Fisher loves me.